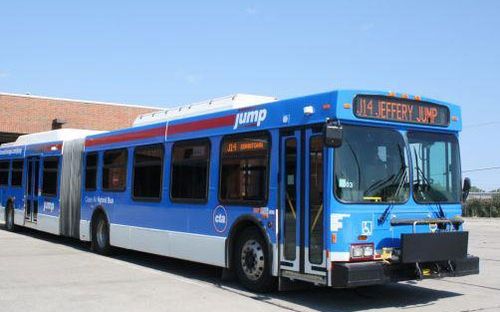 Bus Rapid Transit services were launched or expanded in Chicago and several other cities across the US in 2012. Photo credit: Chicago Transit Authority.

BRT advocates have pushed for BRT on exclusive rights-of-way, such as along abandoned railroads. But when that type of corridor has been available, light rail usually has been the mode of choice.

For the Twin Cities, the launch of a new Cedar Avenue BRT line will begin service in 2013, but 2012 saw several new BRT openings across the country:

In Chicago, the Jeffery Jump, a limited stop service, uses a new on-street bus lane on the southeast side of the city, supplementing local service.

The Las Vegas Sahara Avenue Corridor, a 12-mile BRT line, is part of a “Complete Streets” reconstruction, with wide sidewalks, landscaping in the median, dedicated bus lanes in certain areas of the corridor, and street trees. It operates with double-deck buses and raised station platforms that minimize the first step into the low-floor buses.

Monterey, California, has implemented the 6.75-mile JAZZ BRT. In addition to the usual amenities, each bus shelter has a pair of video cameras to deter crime. At each stop a bar code can be scanned with a smart phone and it will link the person to a live recording of a performance from that year’s Monterey Jazz Festival.

Stockton, California, of all places, has opened its third BRT route, the 6.3-mile Joaquin Hammer Lane Corridor, with off-board fare collection and signal priority. They report a tripling of ridership compared to the local buses that preceded the BRT.

San Antonio’s new Primo BRT has CNG-powered buses, free Wi-Fi, and LRT-style bike racks inside the bus. An innovation to consider adopting here is the rear facing, self-restraint wheelchair spot. The passenger in the wheelchair backs up against a bulkhead and doesn’t need to be belted in by the driver–quite a time saver. 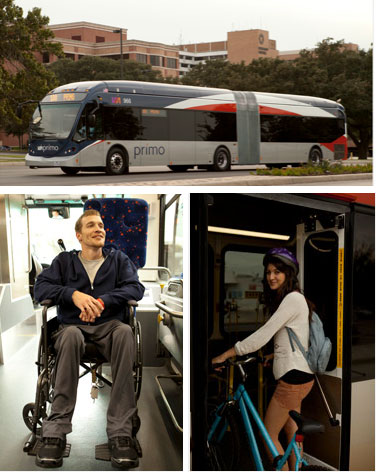 New BRT vehicles in San Antonio are designed to make boarding easier and faster for passengers, including those using wheelchairs and boarding with bikes. Photo Credit: Via Primo

Modern streetcar pioneer Portland, Oregon, doubled its mileage with the opening of the 3.3-mile Eastside Loop. Following Portland’s lead, there has been a wave of streetcar studies and construction starts across the nation, and some of those will open in 2013. 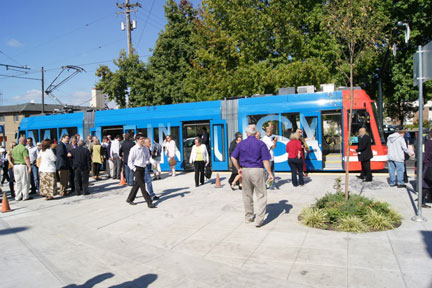 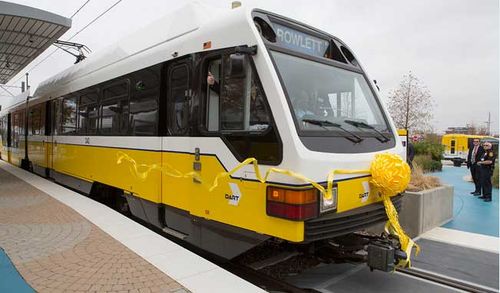 Los Angeles opened the 6.5-mile Phase I of its Expo Line LRT, bringing the system mileage to 60. Ironically, it uses the right of way of one of the former Pacific Electric “Red Car” interurban lines, which was run out of business by auto competition in the 1950s.

Sacramento and Pittsburgh each added one-mile extensions to their existing LRT systems.

Both the West Coast and the East Coast saw an expansion of commuter rail lines in 2012. Seattle’s Sounder rehabbed a run-down branch line to extend service to Lakewood, Washington. On the opposite coast, Boston’s MBTA made a further extension beyond Providence, Rhode Island, down the high-speed Northeast Corridor to Wickford. Although known for Amtrak service, six local transit authorities run commuter trains over most of the Northeast Corridor.

The Funding Gap for Transit, Bicycling, and WalkingTransit is a GO in Governor’s budget