Editor’s Note: Thanks to Jay Walljasper for this new guest blog on the rise of bicycling in NYC, the latest of several cities to follow Minneapolis’s lead in launching a bike share system. Here in the Twin Cities, we’ve also experienced a significant increase in bike ridership as bicycling infrastructure has expanded and improved. Through TLC’s role in administering the Bike Walk Twin Cities nonmotorized transportation pilot program, we’ve fostered and documented these shifts. We’ve also seen firsthand the positive impact on safety and the culture change precipitated by real investments in active transportation. Join TLC Thursday, June 13, at Transportation on Tap for a closer look at another benefit: the economic impact of bicycling. 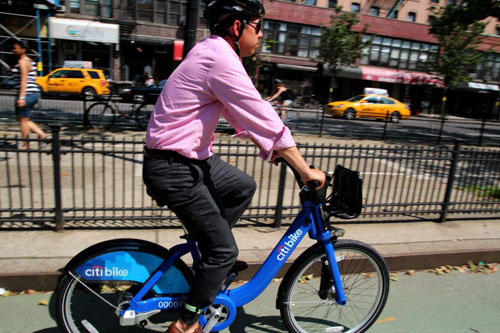 Former New York mayor Ed Koch envisioned bicycles as vehicles for the future, and in 1980 created experimental bike lanes on 6th and 7th Avenues in Manhattan where riders were protected from speeding traffic by asphalt barriers. Some people immediately roared their disapproval and within a few weeks the bike lanes were gone.

Twenty-seven years later, New York mayor Michael Bloomberg and his transportation commissioner Janette Sadik-Khan saw the growing ranks of bicyclists on the streets as a key component of 21st-century transportation, and began building protected bike lanes in Manhattan and Brooklyn.

These “green lanes” were an immediate hit with the public but a noisy reaction came from a small group of well-connected people. New York magazine declared the situation a “Bikelash” on its cover.

Pressure mounted on Bloomberg to sack Sadik-Khan and rip out the green lanes. Anthony Weiner, then a Queens congressman and mayoral hopeful, told Bloomberg he would spend his first year as mayor attending “a bunch of ribbon cuttings tearing out your [expletive] bike lanes.” Bicyclists everywhere braced themselves for a setback, which would once again slow progress toward safer streets in New York and around the continent.

Now two years later, Sadik-Khan is still commissioner and bike lanes continue appearing across the city, including 11.3 new miles of green lanes last year alone. Two-thirds of New Yorkers call bike lanes a good idea in the most recent New York Times poll, compared to only 27 percent who oppose them.

Another of Bloomberg’s and Sadik-Khan’s big ideas to improve New York is now sparking controversy: the Citi Bike bike sharing system, with 6,000 bikes available at 330 stations in Manhattan and Brooklyn. A member of the Wall Street Journal editorial board has called the idea—which is already up and running in Boston, Washington, Minneapolis-St. Paul, Denver, Chattanooga, Montreal, Toronto, Ottawa, Houston, London, and Paris—“totalitarian” in an unintentionally hilarious “interview” here. But judging from the popularity of bike lanes and success of bike share in other cities, this brouhaha will blow over.

Tim Blumenthal, president of PeopleForBikes and the sister Green Lane Project, stresses, “Bike issues need to be framed in the context of what they mean to the city, not just what they mean to people who bike. In New York City, for example, more green lanes, better bikeway networks, and the new Citi Bike system will benefit all residents and visitors by reducing traffic, noise, and air pollution—making city life a little less frenetic for everyone.”

Other communities will no doubt face their own version of bikelash, but the high-profile debate in New York over bike lanes highlighted two key assets of protected lanes: 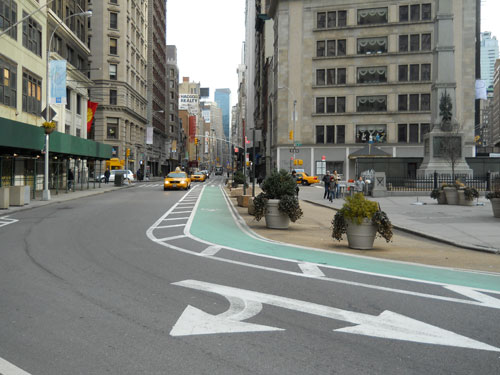 Just one example of the growing network of bicycling infrastructure in NYC, this painted, buffered bike lane provides a highly visible, dedicated space for on-street bicycling.

New, unfamiliar ideas like green lanes always spark opposition—at first. “Push back is inevitable,” Fried explains. “It doesn’t mean the project is flawed. Once it’s built, the constituency for it will grow.”

Complaints about a “war on cars” have echoed around Seattle from a small but persistent chorus opposed to bike lanes. In response, the Cascade Bicycle Club commissioned a poll of Seattle voters (conducted by the independent research firm FM3 using a scientifically rigorous sample of 400 respondents), which found that 79 percent view bicyclists favorably, 73 percent want to see more protected green lanes, 59 percent support “replacing roads and some on-street parking” to build green lanes,” while only 31 percent believe Seattle is “waging a war on cars.”

Increasing numbers of Americans are embracing bicycling to commute, run errands, exercise, and have fun. Green lanes and other new bicycle infrastructure being built across the country are encouraging even more people to ride by making the streets safer for bicyclists of all ages and backgrounds.

Jay Walljasper writes, speaks and consults frequently about biking and other ways to improve our communities. His website: www.JayWalljasper.com

Red Line Connects to South MetroA hard-fought campaign. A few gains, but not the big win.