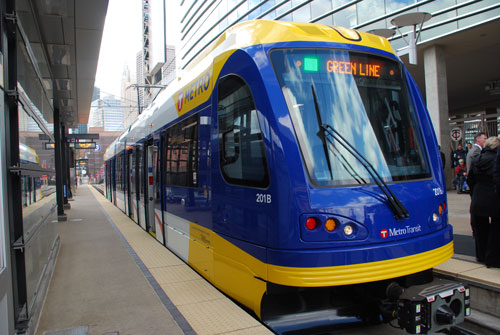 As we’ve no doubt made clear in other blogs, TLC wholeheartedly supports the Southwest light rail transit (LRT) line. This line is a key element of what we hope will someday be a fully-realized network of bus, rail, and streetcars that serve this region, with safe, accessible connections by bicycling and walking.

With the ongoing controversy surrounding the future location of a freight rail line, we can’t forget that Southwest LRT is a good project:

1)      Southwest LRT will improve affordable access to jobs, school, recreation, and services. Particularly for low-income residents, the line will greatly expand transit access to large and growing job centers in the Southwest metro and to educational opportunities.

2)      Southwest LRT offers a high return on investment (ROI). A study by the ITASCA Project, an alliance of business organizations, projects a four three dollar return for every dollar invested in the accelerated buildout of a regional systemof transitways, including Southwest LRT. Other studies also have concluded that light rail is the right investment for the Southwest corridor.

3)      Southwest LRT is projected to carry 30,000 riders daily, providing an alternative to driving on congested roads and reducing trips by motor vehicles in the corridor and elsewhere within the region. Vehicle emissions contribute to global warming and to air quality and health impacts along highways and local streets. Driving trips also contribute to the noise and traffic about which almost everyone seems to complain.

4)      Southwest LRT better positions the Twin Cities metro region for economic competitiveness and the realities of changing demographics. This project is a major step in the right direction for young people who are driving less, our growing senior population, and employers who want access to a larger labor pool and to spend less on employee and customer parking.

As long-time advocates for transportation options, Transit for Livable Communities sees the importance of Southwest light rail as part of a system—a system that includes additional LRT lines, expanded regular-route bus and rapid bus, streetcars, as well as safe, accessible connections by walking and a network of bicycling routes.

With that in mind, we urge project planners to keep the cost of Southwest LRT at a reasonable level. TLC is working hard with our allies to secure an increase in the regional sales tax for transit, bicycling, and walking, along with new funding for roads and bridges. Even when the state legislature approves this funding, it will be a stretch to accommodate all the demand that exists for growing transportation options. We can’t let the cost of Southwest balloon to an extent that it slows the long-overdue implementation of other important transit and bike/walk projects in the region.

Nevertheless, some increased cost beyond the original capital estimate, to address local concerns and better serve future transit riders, is warranted. The latest capital cost projections for Southwest LRT range from $1.25 to 1.5 billion. These numbers are not out of line with the cities with whom we are competing with for matching federal funds. A number of these projects have costs exceeding $1 billion.

Similarly, from our system-wide perspective, as Southwest LRT planning moves forward, we recommend that bicycle and pedestrian connections to all stations be carefully assessed and that multimodal access be maintained in the corridor.

Advancing a complex project like Southwest LRT is never easy. Elected officials and agency staff are analyzing hundreds of details, from engineering to water flows to trees to travel time, and are weighing the concerns and interests of the many communities involved. We urge proponents–whether of shallow tunnel or freight reroute or other options—to be vocal, as well, about the community benefits of increased transit. And we urge all those who support progress on transit, bicycling, and walking to make sure their voice is heard in the next month as the Southwest LRT Corridor Management Committee and the Metropolitan Council comes to a decision.

Also of interest, the PowerPoint from the Corridor Management meeting on August 28.