You probably see Share the Road signs along streets where you live and work. But what does ‘Share the Road’ really mean?

Simply this: whether you are driving, bicycling or walking, the roads are public spaces that you have the right to use. Sharing means paying attention to how to make these streets as safe as possible. And this can be boiled down to two things:

Never compromise your safety for the convenience of another, and,

Never compromise the safety of others for your own convenience.

Say you’re biking along and suddenly the bike lane comes to an end, and the road narrows. Should you ride in the gutter pan with all the debris, or do you boldly get out in the lane and assert your right to be on the street, even if it means motorists must change lanes to get around you?

The law gives you the right to take the lane. And often, this is the safest place to ride. When this is the case, Share the Road signs can be misleading.

Why? Well, it seems that some think these signs mean the cyclist should get in the gutter or as close to the parked cars as possible, so they can squeeze by; many people have been taught (and some officers still believe) that cyclists need to ride as far to the right as possible.

But that’s not what the law says.

The law actually says bicyclists should ride “as far to the right as is practicable,” and it’s never practicable to ride in such a way that might land you in the emergency room. The law actually recognizes situations where a cyclist may need to take the full lane to be safe.

So let’s review your options

If there is ample room for a motorist to pass you in the same lane (in other words, if there is room for a bike lane to be striped—whether or not there is one) then, the best place to ride is to the right of the moving motor vehicles. If there are parked cars, you’ll want to stay a good distance (a hard kick away) from those cars

If there isn’t room for motorists to safely pass you in the same lane (meaning being able to abide by the law, which requires leaving 3 feet of clearance) then the law allows you to control the lane. Controlling the lane typically means riding in the middle of the travel lane so that passing motorists must change lanes.

According to the Mn/DOT Bikeway Facility Design Manual (2007), Share the Road signs are appropriate where “routes lack paved shoulders or other bicycle facilities, but are still used by bicyclists… to help reduce motor vehicle/bicyclist conflict.” But what many officials don’t realize is that these signs are not 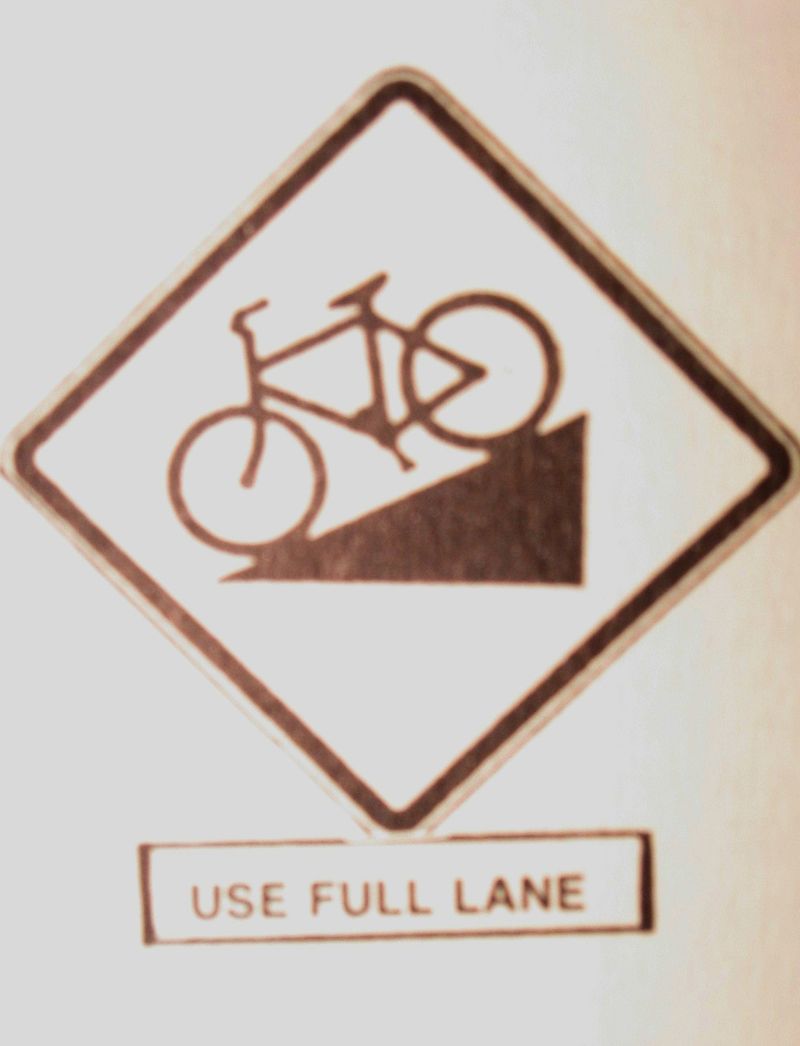 recommended when the lane is too narrow (less than 14 feet wide without parking and less than 22 feet with parking) for motorists to safely pass cyclists without changing lanes.

Instead, the sign suggested by the Mn/DOT Bike Modal Plan is one that tells motorists to “Change Lanes to Pass Bicycles,” with the optional “Bicycles Allowed Full Use of Lane” to reinforce the message. Mn/DOT advises the use of such signs on urban streets with travel lanes of 13 feet or less.

For those of you wondering how that translates into real life, well, lanes on most urban roads are less than 13 feet wide. So both the law and safety experts agree that if you are going to be riding on roads like Franklin Avenue or Lake Street or Lyndale or Broadway – or just about any of the streets in downtown St. Paul and Minneapolis without bike lanes, the best place to ride for your own protection is near the center of the rightmost lane that goes to your destination. If you’re going straight, this means also that you don’t want to be in a right turn only lane, or to the right of right turning vehicles.

Of course, this isn’t what is communicated with the Share the Road signs, which is why Transit for Livable Communities is pushing for the use of the more clear signs that tell cyclists they may use the full lane. Look for these signs next year on the downhill stretch on Marshall Avenue in St. Paul between Cretin Ave. and the Lake Street Bridge.

Steve Clark is a League Certified Cycling Instructor (LCI #151) and has been approved to certify new cycling instructors through the League of American Bicyclists. He has been teaching safe cycling for more than 30 years.