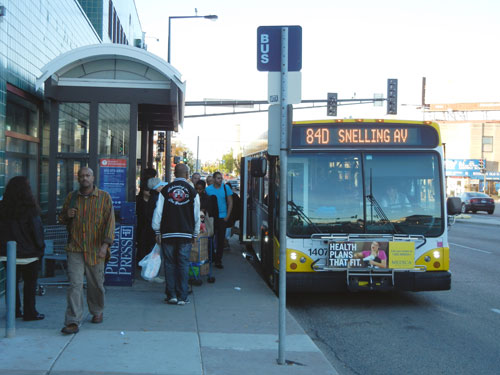 In September, Metro Transit received disappointing news when its proposal for a $10 million grant needed to launch rapid bus service on Snelling Avenue in Saint Paul and Roseville was not selected for federal TIGER funding. The U.S. Department of Transportation received nearly 600 applications and funded 52 projects in 37 states, including a port project in Duluth and a rural road safety project submitted by the Minnesota Department of Transportation.

Snelling Avenue Rapid Bus would be the metro region’s second bus rapid transit project, but the first on a non-highway corridor. The line would substantially replace the current Snelling route 84 bus, which connects Rosedale Shopping Center with the 46th Street light rail transit (LRT) station in south Minneapolis. Bus service for today’s 3,800 weekday riders can be slow, especially at high traffic and high ridership locations. Many of these areas have inadequate facilities for passengers.

As we wrote this summer, rapid bus investment along Snelling corridor would enable more frequent, faster, and more reliable service with the use of traffic signal priority for buses, off-board fare collection, and half-mile station spacing. Improved stations would have better protection from the elements, bus arrival signs, and improved security. These rapid bus investments are expected to grow daily ridership by 3,000 by 2030.

Until another source of funding for Snelling Rapid Bus is identified, however, this key transit improvement project cannot move forward. The capital cost of the project is estimated to be an affordable $25 million, $15 million of which is already secured. Annual operating costs would be an additional $3.7 million, offset by revenue from the projected increase in ridership.

Unfortunately, this question of funding for rapid bus is not limited to the Snelling line. The Metropolitan Council´s plan for expanded bus service in the Twin Cities region includes the addition of 12 rapid bus corridors before 2030. Metro Transit’s 2012 study of rapid bus estimated that it would cost $400 million to build all 12 corridors. The annual operating cost differential for full implementation would be approximately $40 million. This operating increase would be offset by new revenues from new transit riders; the study projects over 160,000 daily users will benefit from the system, including 31,000 new bus riders shifting from driving to transit as a result of the improvements.

Rapid bus lines are a very cost effective transit investment and will be an important addition to the region’s public transit system. While rapid bus is not expected to have LRT’s transformative impact on development, it provides critical service on busy “main street” corridors, reinforces higher density development along these corridors, and connects riders to local and regional destinations and the growing light rail system. Rapid bus investments will add to the strong ridership that exists today and will better serve many of the riders that need transit the most.

With its affordable costs and great ridership numbers, the region needs to get the first rapid bus line off the ground. For information on the Snelling Rapid Bus see metrotransit.org/snelling-brt.

Collaboration & planning for bicycle and pedestrian safetyThe Economics of Bicycling