By Linden Weiswerda, The Trust for Public Land (guest blogger)

Editor’s Note: Our Twin Cities metro region is well known as a place where cityscape meets green space. Millions visit our robust regional park system each year. But did you know that most arrive by car? Some efforts are already underway to connect more residents and visitors to Twin Cities parks in other ways. For example, the Sierra Club North Star Chapter regularly leads outings to parks and natural areas via transit. Nice Ride MN bike sharing will begin serving expand service to Mississippi River Park and Recreation Area this summer. And next year, new bus service on Lexington Parkway will improve access to Saint Paul’s Como Park–one of our most visited regional parks. As our region’s population grows and the regional park system expands, will current transportation options ensure the parks are accessible to all? Here, guest blogger Linden Weiswerda with The Trust for Public Land makes the case for continuing to improve transit service to our regional parks. 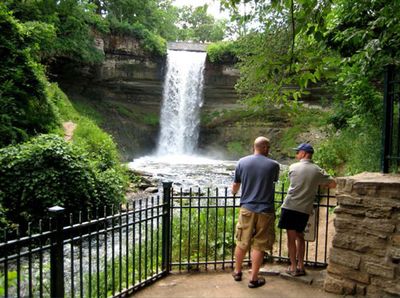 Have you ever ridden a bus or light rail train to your nearest regional park? Chances are high that your answer is no. According to the last Regional Parks and Trails Survey (2008), less than 1 percent of people arrive at Twin Cities regional parks and trails via public transit. While the Minneapolis-Saint Paul region is filled with a diverse array of popular regional amenities that can be reached by multiple modes of transportation, our regional parks largely remain an untapped destination for the regional transit system.

The Twin Cities regional park system—which includes sites from the Chain of Lakes Park in Minneapolis to Big Marine Park Reserve in Washington County, and 49 other parks and park reserves—is an invaluable asset that helps keep our region thriving and acts as “the state parks of the metro area” (Metropolitan Council). As the largest and most natural public lands in our metro area, the regional parks provide a unique experience for visitors. In addition to protecting the most important and sensitive natural areas in the Twin Cities for current and future generations, they are central to creating healthy and enjoyable communities. And enjoy them we do, with over 44 million visits annually to the regional park system. Time after time, surveys cite that parks are one of the top reasons people find the Twin Cities region attractive and want to move here. 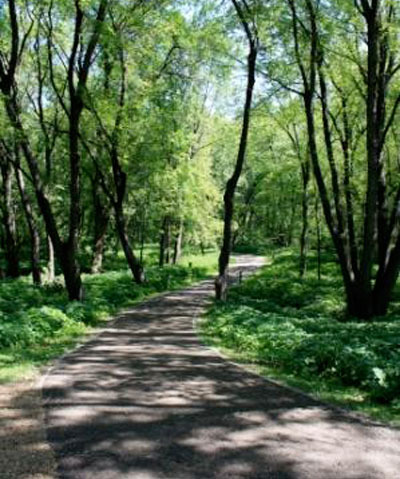 However, the 2008 Regional Parks Survey also found that almost 60 percent of visitors to the parks arrive by “auto, truck, RV, or van.” Meanwhile, as Transportation for America reports, 40 percent of Minnesotans are without a driver’s license, exceeding the national average of 32 percent. If large numbers of residents in the region cannot get to the regional parks and trails to enjoy them except by car, how can this significant segment of our population benefit from the regional parks? Combine this with decreasing rates of car ownership, particularly among younger and older demographic groups, and the regional park system could actually become less accessible over time—unless our region does more to improve transit service to these destinations.

The current Twin Cities transit system provides limited means for travelling to regional parks, in part because peak service times are tied to the typical work commute. Transit services run most frequently during rush hours on weekdays. However, park use generally peaks for special events, in the evenings, and mostly on weekends. 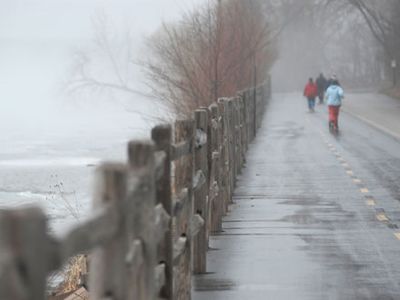 Livable communities are active seven days a week and throughout the day as well. For comparison, think about a movie theater and office building that share a parking lot. During the week office employees fill the lot, and in the evenings and on weekends moviegoers take the same spaces. As a result of this shared use, the parking area needed to meet demand has a reduced development footprint, smaller amounts of pavement and stormwater runoff, and generally has created a more efficient community that is utilized more of the time. Increasing connections among the regional transit and regional parks and trails systems could similarly benefit both systems, picking up more transit riders in off-peak times and making regional parks more accessible to more people at more times.

In building an efficient transit system, one with more housing options and other development near stops and stations and with higher rider capacity, we should also be sure that our transit system connects as many regional attractions as possible, perhaps by both siting new parks near transit lines and by extending bus service to parks in current off-peak travel times. Our regional park system is also growing: current plans are to add more than 15,000 park acres and 700 miles of trails by 2030. By taking advantage of that growth, we can ensure that people can ride the bus or train, bike, or drive to their choice of regional parks.

If you’d like to explore a fun tool for seeing which regional parks (or other regional amenities) you can reach via transit in a certain amount of time, check out Mapnificent. Mapnificent is an online tool (still in an early phase of development) that shows you the area you can reach via public transportation from any point in a given amount of time. (A sample map for regional park destinations is pictured below). 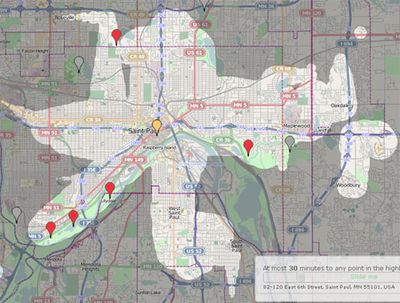 Mapnificent generated this map of regional parks (red) that can be reached by transit from downtown Saint Paul (orange) in 30 minutes or less. (Note: Mapnificent does not work in Internet Explorer, but will work with other major web browsers.)

All featured images provided courtesy of The Trust for Public Land.

MnDOT Plans for the Future