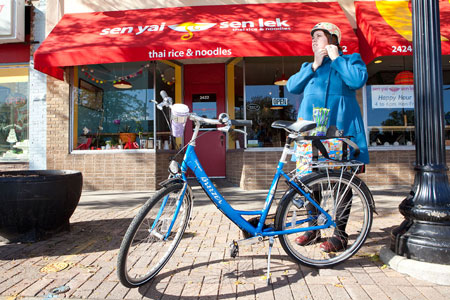 This summer, TLC member and allies gathered in Minneapolis to take a closer look at the economics of bicycling. Over 40 people attended the Transportation on Tap event, which featured presentations and discussion from TLC’s Joan Pasiuk and Steve Clark. Thank you to everyone who was able to join us!

Bicycling for transportation is a convenient way to build physical activity into your daily life. Getting active is essential to healthier living and reducing health care costs. One study shows that obese workers lowered their annual health care costs $400-$500 by being physically active 1-2 days a week. Locally, Quality Bicycle Products (QBP) estimates that they saved $170,000 in health care costs over three years by implementing bike-to-work incentives for their employees.

Additionally, an analysis of the nonmotorized transportation pilot program (which includes the Bike Walk Twin Cities program in the Minneapolis area) found that increases in bicycling resulted in nearly $7 million in savings in one year from extended length of life (ie. avoided “economic cost of mortality”) across four pilot communities.

Cars are expensive—expensive to buy, and expensive to maintain. There are oil changes, flat tires, filling the tank up with gas, and much more. Estimates suggest that owning a car costs the average household around $8,500 per year. For low-income households, the cost burden is very high. In contrast, the average annual operation of a bicycle is just $308. This means that the average American only has to work 16 hours a year to pay for their bicycle.

When cities invest in bicycling infrastructure, it is good for business. First, there are property valued increases–properties within 150 feet of bike paths sell for $8,800 more than their counterparts. Second, bicyclists tend to spend more money in their local economies than folks who arrive by car. An Oregon study showed that for all businesses except supermarkets, bicyclists, transit users, and pedestrians spend more, on average, than those who arrive by car. Here in the Twin Cities, businesses near Nice Ride Minnesota bike-share stations saw an estimated $150,000 increase in customer revenue over the course of a season. These increases in spending are substantial and help explain why some businesses (including Birchwood Café and Northbound Smokehouse Brewpub) are happy to give up one or two car parking spots to install bike corrals and other increased bicycle parking.

Investing in bicycling infrastructure is a cost-effective way to get people from A to B, while also fostering the economic benefits above. Putting in one mile of bike lane costs an average of $50,000 (often much cheaper). In contrast, according to the Minnesota Department of Transportation, one mile of highway costs $30 million on average. This cost varies by project. Highway 36, for example, cost $25 million per mile, while Highway 100 cost $100 million per mile.

More on the economics of bicycling: