Good transit and bikeable, walkable neighborhoods are increasingly important to a metro region’s economic future. It’s a key reason to stay tuned in to the progress on Thrive MSP 2040—the Metropolitan Council’s long-range development plan for the Twin Cities region. Thrive MSP 2040 will set the direction and guidelines for where and how future housing and job growth occurs throughout the metro. And, as we’ve blogged in the past (here, here, and here), this plan should ensure that there will be synergy between development and transportation investments.

Less than three years ago, the Met. Council predicted that population growth in the Twin Cities region would boost the demand for vehicle travel substantially in the next 20 years. Recent changes in market forces, however, instead reflect growing demand for more transit, walking, and bicycling and reduced demand for driving. In combination with demographic shifts toward an older and more diverse population, this new reality compels the Council to move in a new direction. 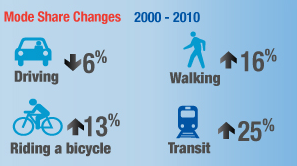 When the previous long-range development plan was crafted, it encouraged 70 percent housing and job growth to developing/rural parts of the region and only 30 percent development in Minneapolis, Saint Paul, and 63 surrounding suburbs—that means that most development was targeted to agricultural land and open space.

With our partners in the Coalition for a Strong Region, TLC has been advocating for a more sustainable, equitable, and affordable plan that targets the majority of new development inside Minneapolis, Saint Paul, and these closer suburbs. Specifically, TLC has pushed for 70 percent growth inside this zone and only 30 percent growth outward to developing/rural portions of the region.

The updated local growth forecasts (for each city) that the Met. Council released this fall signal a major shift in this direction—projecting 55 percent of future housing growth in Minneapolis, Saint Paul, and 63 surrounding suburbs through 2040. 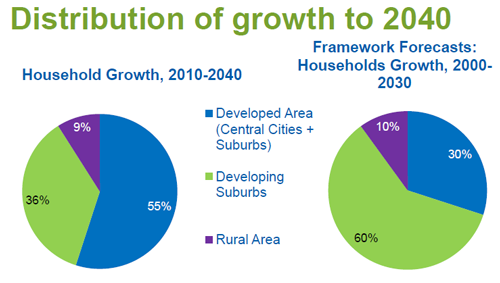 TLC welcomes the change, but hopes that portion will increase to 70 percent, and that specific regional and local growth centers—for housing/jobs and industrial development—will be identified in the plan. It is hard to target development in a cost-effective way when you simply identify all of a city as the target. We believe specific regional locations should have the right zoning to accommodate the growth, as well as existing and proposed high-frequency transit service. Thinly spreading our limited financial resources—federal, state, and regional—is not going to achieve the results we need. Instead, resources should be targeted to specific locations if they are going to make a difference.

Seattle, Portland, and other regions show why it’s important to identify centers in the plan: More development inside the beltway, rather than on the region’s outer edge, not only encourages the use of new transit investments, but also protects resources, reduces greenhouse gas emissions, and contributes to a thriving region.

The current draft of Thrive MSP policy directions signals a change in strategy for regional growth, but doesn’t yet set standards for results or emphasize transit and active transportation explicitly. It’s easy for TLC to get behind a more sustainable vision, but higher goals, more specifics, and performance measures are essential if Thrive MSP is to have any significant effect on the regional policy plans or local comprehensive plans that follow.

This is perhaps most crucial with regard to the Thrive MSP goals that emphasize racial equity, reduction of greenhouse gas emissions, and water protection.Particularly given the extensive racial disparities in our region, theCouncil’s main charge of promoting “orderly and economical development” must include equitable access to opportunity. And, if we are serious about sustainability, the region can’t afford not to take action against climate change. Both of these outcomes are served by focusing limited transportation resources on transit expansion, and by leveraging market forces to achieve more compact development.

As a draft of the full Thrive MSP plan is released in early 2014 and as progress on regional policy plans—Transportation, Housing, Water Resources, and Regional Parks— is made, we encourage readers to advocate for:

The Move MN Campaign Gets MovingSpace Available: Share an Office with TLC!